We thought this Q+A would be especially relevant this week given the current global state of affairs, but if anyone can inspire you to keep going, it’s serial entrepreneur Carley Jones. From working in call centres at the age of 17 to building numerous multi-million-pound businesses, including the notorious  Kettlebell Kitchen and Boombae, this girl knows how to navigate life’s ups and downs!

If you’re feeling stressed, a little unsure about what’s going on at the moment, and need a bit of motivation, then this Q+A is for you!

Carly, firstly we’d love to know a bit more about you; what’s your story? 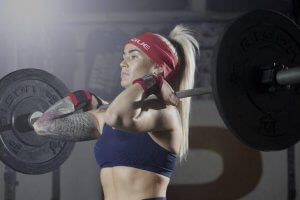 “Well, I started out in call centres, just on the phones, as a 17-year-old in Newcastle, but I quickly began working my way up until I was a call centre team leader in Manchester. After that, I moved up to Manager and then eventually Head of Sales! I even moved abroad to manage people in South Africa at one point. After that, I opened my own call centre. which I had for a few years.

My life really began to change though when I got heavily into Crossfit. I found this whole new Carley and I felt absolutely great, but I became more aware of what I was putting in my body food and drink wise and then it occurred to me that there wasn’t a healthy fast food place anywhere. After training, I’d have to go to the shops just to be able to pick up something fresh and then cook it at home. That’s where my idea for Kettlebell Kitchen was born. I’d never even worked in hospitality before or behind a bar. I was a complete fish out of the water, but I felt so ready to spread my wings and take a risk!”

Amazing, to have the confidence to take the risk on a completely new industry! So how did you stay motivated?

“Hmm, I think it’s in me! I’ve always been really driven and tenacious, though I was a bit of a crappy teenager! I dropped out of college, used to go drinking at the park, that sort of thing, but I think something just clicked in my head, that I wanted to do better in life and I just wanted to make my family proud and that feeling still drives me to this day.

What’s the biggest thing you’ve ever had to overcome? 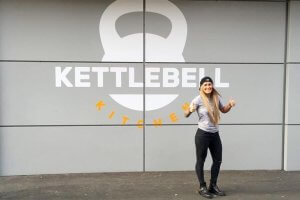 “HaHa, there’s plenty to choose from. Being a woman in business in general, regardless of what people say, really isn’t easy. Being a headstrong successful female in a male-dominated environment was one of my biggest challenges for sure, and then the endless battle to both be there and stay there, god it was, and is, still really hard! You sometimes feel like they’re just looking at you, too and I’m sure that’s changed over the last few years, but we’ve still got a hell of a long way to go.  Since my story came out about Kettlebell, 50 or 60 people have reached out and said that exactly the same thing has happened to them. 99% of people, in my experience, that have done this to others, are men and I know that It’s gonna make me unpopular by saying that but in my experience that’s true.

Now that you are where you are, how have you been able to find and recruit the RIGHT people?

“Well, I’ve certainly hired a lot of the wrong people! In the past, I’ve always looked at a CV and where people used to work before, skills and experiences, and that was it. Now I’ll have a really good chat with the person – morals, values if they believe in themselves and where they wanna go. Do they share the same values as me? I don’t even bother looking at CVs now, and I think that’s how it should be”.

“Well, my values have changed a lot since Kettlebell Kitchen. My Why, I suppose, is happiness. I want to make sure I have time for me and to be able to spend quality time with my family. The money aspect is great but as long as I can pay the bills, that’s really all that matters now. I left all that  “money money money” philosophy at Kettlebell. My WHY is to make a nice life and be happy, I’ve gone full 360 with it over the last few years, but I’m definitely so much happier for it now though.

What advice do you have for people with regards to what’s going on at the moment in the world?

“Absolutely look for support. Use social media, use LinkedIn, don’t be shy! Asking for help and advice is the best thing you can do! Be ballsy, give things a go and most importantly, have faith in yourself, that will really get you a long way”

If you want to know more about the history to Carley’s story, here is the link to her 10,000-word blog detailing everything that happened in her own words.