If you’re reading this, I guarantee you’ve thought of an excuse at some point in life which has stopped you doing something. I know I certainly have. Sometimes it’s something mundane like ordering a takeaway instead of cooking or hitting the snooze button when you really should’ve got out of bed.

Or, perhaps you decided not to speak up in a meeting because you were afraid of the response, or not to apply for that dream job, because you’ve convinced yourself that maybe, just maybe, you’re not good enough for it. Not so mundane now, hey. 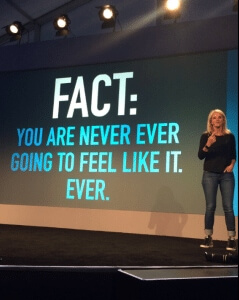 I’ve read my fair share of books over the last couple of years but The 5 Second Rule by Mel Robbins is one which has by far made the biggest impact on both my professional and personal life.

In fact, it’s the reason I’m in this job.

According to Mel Robbins, the rule is simple: If you have the instinct to act on a goal, you must physically move within 5 seconds or your brain will try to stop you.

“This 5 second window exists for everyone. If you do not take action on your instinct to change, you will stay stagnant. You will not change.”

In short, this book teaches you how to overcome every excuse you’ve ever thought of in order to get the important stuff done and make a real, sustained change in your life.

What astonished me about the 5 second rule is that it doesn’t just apply to individuals, but companies too. Of course, as we head into 2020, goals are being set left right and centre, and this book explains, in surprisingly meticulous detail, how counting down from 5 can help businesses reach and even exceed them.

Now here’s the kicker… Conceptually, it’s a remarkable idea, but make no mistake, you have to WANT to create change in your life for this rule to be truly effective. Mel can shout all she wants about the science behind it but if you are not motivated to make a change, you won’t. I urge you not to go into this book with the belief that it’ll solve all your problems because you’ll be disappointed. It will, however, give you the tools you need to transform every area of your life – but only if you want to badly enough!

According to Robbins, counting down from 5 is a form of metacognition that switches the gears in your brain, so that your mind works with you – instead of against you. It allows us to do the things we don’t want to do. Before our brains have had the opportunity to hold us back, we’ve already taken action: we’re already putting down the takeaway menu, we’re already getting out of bed before we can hit snooze, we’re already applying for that dream job, and we’re already making amazing things happen. Because all it takes is 5 seconds.