In 2013, two business partners, Matt and Marcus, founded Summerhall Distillery. They had helped install a brewery on the Summerhall site, a building which used to house part of Edinburgh University’s vet school and thought it would be nice to have a distillery alongside it.

Matt and Marcus invited existing distillers to the site and after several knock-backs by larger companies, they had a go themselves.

As keen gin and tonic enthusiasts, there was only one product they wanted to make. Soon, the kennels in the old vet school were transformed as distilling equipment was shipped in from Portugal and assembled on site. They built a small, perfectly formed distillery. Unfortunately, around this time, Marcus’s father passed away, but soon after, an old friend of his contacted him, passing on a 70-year-old family gin recipe from Mumbai. After a few tweaks and numerous family and friends volunteering to be taste testers (who wouldn’t!), Pickering’s Gin was born and four days later, it was launched. It sold out – on day one.

10 days later, Matt and Marcus approached Dave to join the team. Dave has been the General Manager for the distillery for the last seven years. He shared their story with us.

What was it like when you first started out?

“It was just the three of us for the first six to eight months, it really was all hands to the pumps. We were the distillers, the bottlers, the tour guides, the sales team and the ambassadors, but we soon realised that we needed to grow the team as we scaled up. Over the years, we became a team of 16 staff, selling our products around the world. Today, we hold a five-star tourist rating for the distillery tours we host. We make gins for The Royal Yacht Britannia, The Royal Edinburgh Military Tattoo, and the Royal College of Surgeons – all from a building which used to be a dog kennels in an old vet school. Things have been going from strength to strength!”

Due to the Coronavirus crisis, you’ve been using the brewery to make hand sanitiser. When did you realise you could do that?

“Well, gin distilling isn’t classed as essential work or an essential product, but in order to have a business after the crisis, we had to keep the distillery running and produce something. We are used to working with high strength alcohol, so turning our hand to hand sanitiser was relatively straight forward – it was a no-brainer. We felt it important to use the skills that we have built up over the years to help the country-wide effort to combat the virus; what better way to do that than use our distillery to fill in the shortfall in supply of hand sanitiser across the UK? 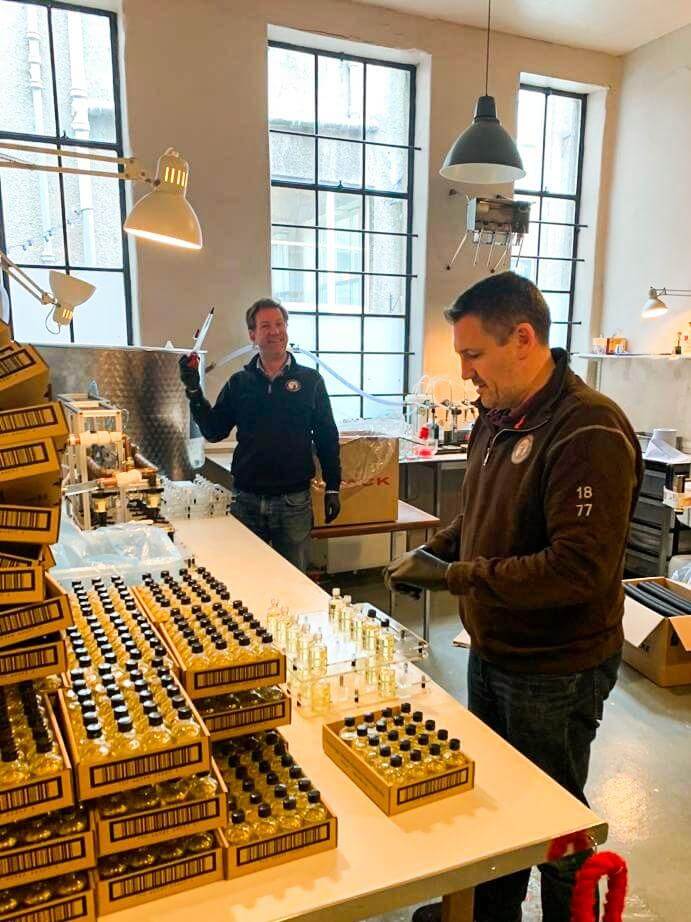 Who came up with the idea?

“Marcus initially suggested something along these lines, but we have all had an input in our own ways. Matt oversees the production elements and it’s up to me to do the ‘sales’ work and ensure the people that need it can get it.  We saw it as a way for our business to be able to continue whilst protecting the rest of the team and helping those on the frontline. The demand was huge. Some companies are contributing towards the cost of production, which allows us to buy more ingredients and in turn help more people. We’ve donated a lot of it to charities and organisations that literally can’t afford to pay us.”

How many bottles/litres are produced and where is it going?

“So far, we’ve filled more than 65,000 bottles and we have a further 20,000 more bottles coming in tomorrow. We’re also doing bulk productions in drums – I think we’ve produced about 14,000 litres of sanitiser so far.”

Is the demand still strong? Will you continue to produce it?

“In the terrible situation we’re in, we were very quick to turn it around. We were actually one of the first to have a product ready to go as far as I could tell. people were coming to us immediately; people from the armed forces, care homes, hospital teams, pharmacies, all over the place. The demand is still high but, thankfully, there are other distilleries now that are also able to produce. It’s been a fantastic effort, right across the distilling industry, to help where we can.” 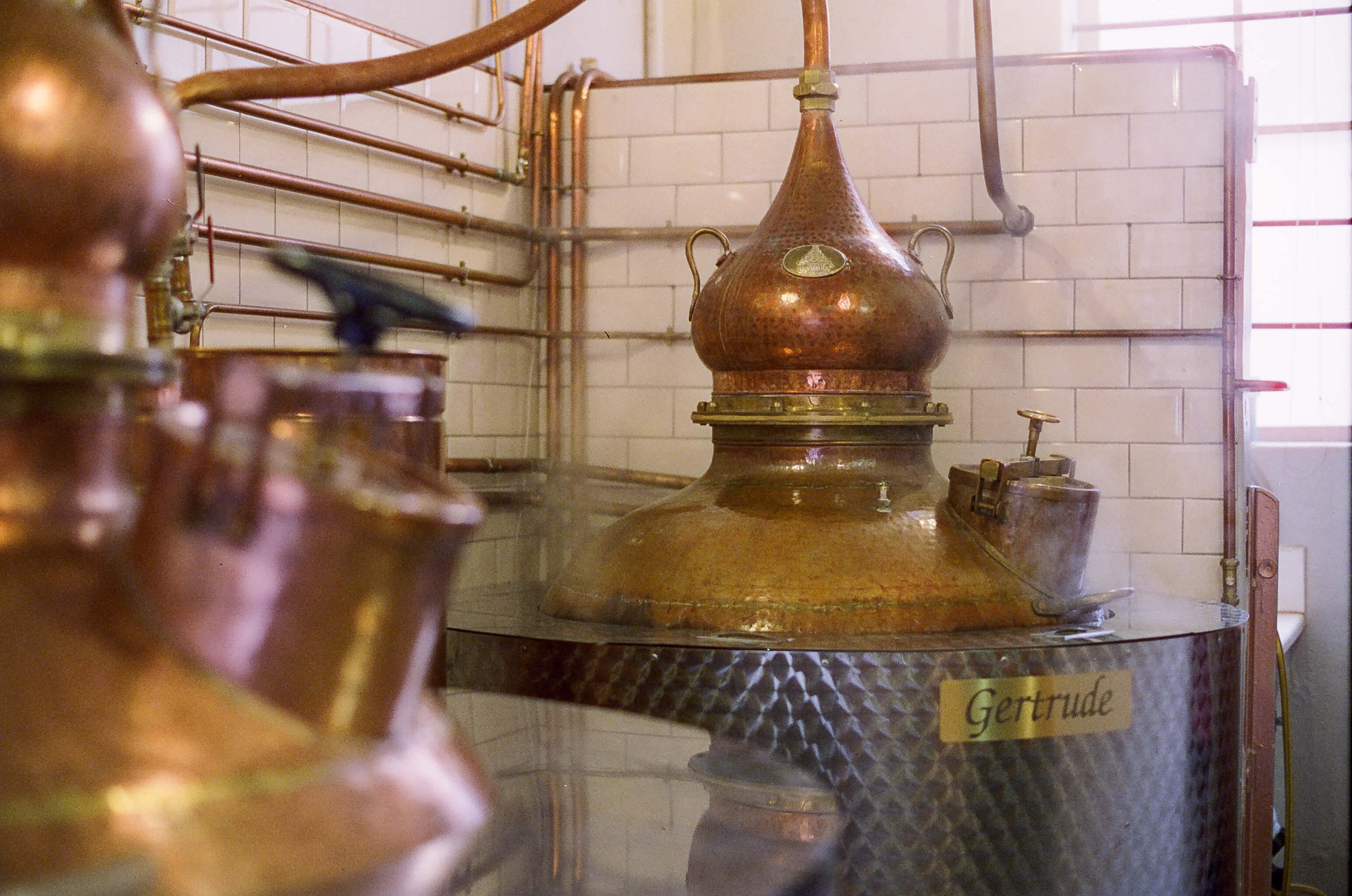 What has the demand done for your normal production? Have you had to up-skill workers?

“Our process is still very similar to the gin production – we’re used to dealing with high-strength alcohol and are geared up for working with it. The bottling plant is the same, other than it being sanitiser bottles and not gin bottles. Overall, not a lot has changed, apart from the ingredients that we are using. It’s no longer fruits, spices and herbs; it’s hydrogen peroxide and glycerine.”

How are you managing to social distance?

“Unfortunately, we’ve had to furlough most of the team. We’re down to four staff in the actual distillery. One is delivering, I’m at home, and then the rest of the team are working two metres apart from each other. We have vigorous clean downs and we’ve also split up our break times. Everybody needs to keep doing their best to keep the measures in place – and it’s working! We have so much sanitiser, we’re probably the cleanest group of people in Edinburgh!”

What do the next six-to-12 months look like for you?

“Well, we’ve discussed a potential plan of continuing the production of sanitiser, but first and foremost we are a gin brand and that will always be our number one priority. We’ve spent years building the brand to what it is now and perfecting the recipe and product. We know there are lots of changes ahead and we’re looking forward to adapting and diversifying.”

What else has this shown you?

I think the biggest thing for me is how people, companies and the country has clubbed together. We are very proud to be doing what we can. We can help, we have helped, and will continue to help for as long as we can, and as long as the demand is there. People ring us and say “we just want to say thank you” – it’s taken us aback; we don’t often get such a thank you for producing gin!

We don’t feel like we would have done much differently; it was the natural thing to do in the circumstances. We’ve had some amazing comments on social media and it really has kept us all going – we’re really just doing our best. Making 14,000 litres of sanitiser isn’t ground-breaking, but that’s what we can do to help.”

Fancy doing a Q+A with us? Email marketing@recart.co.uk to find out more.